Some photographs from the Community Chess Club of Rochester Wednesday night games:

Posted by Mike Lionti - Chess Blog Editor at 10:17 AM No comments:

Next week's Youth tournament will be held at Mendon Center Elementary. Call 442-2430 for more information.


Today, we had a visiting chess player from Paris, France: Joseph Binet. His mother (author, Pauline) and father (photographer, Guillaume) are writing a book containing interviews with book authors from around North America.

We have some interesting web sites by Joseph's father Guillaume:


Visitors are ALWAYS welcome at the Rochester Chess Center!
We wish Joseph and his family good luck on their journey!

Here are some photos from today's tournament:


And for something to enjoy listening to:
Here is the next CBS Radio Mystery theater production that you can listen to and enjoy which features CHESS as part of the plot. Enjoy!
The title is Your Move, Mr. Ellers:

"Chess seems the perfect foil for a sophisticated jewel thief. An insurance investigator looks into the theft of several diamonds and other jewels from a jeweler. A stolen emerald and a game of chess lead him to look into the lives of three supsects: an employee; a long time member at the jewelry store; and a fence. Every character in this story is a chess fan."

And, for something NEW !! 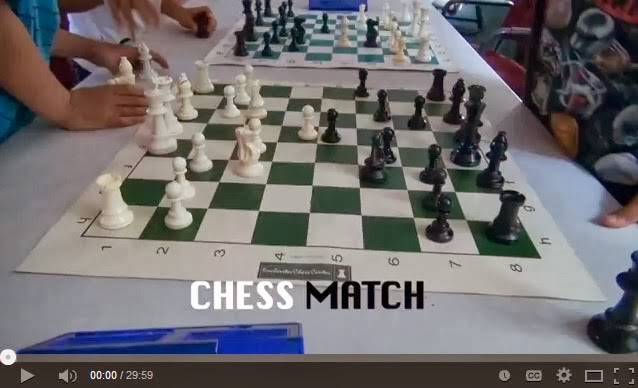 Published on Nov 11, 2013
Second episode of Chess Match teaches chess from a beginners match between Catherine Healy & Katherine Stein, and an intermediate players matchbetween Krish Thakkar & John Healy. Tips of the Match for each game, and more Benefits of the Day. The Victor High School Chess Club is featured at the end of the episode. Episode #2 of Chess Match, an instructional video series airing in New York and featuring instructor Ken McBride and guest instructors David Petty, Ryan Horst, James Hiltunen, Wendy Xia, Ron Lohrman and David Phelps. And featuring chess clubs and competitions from around Upstate New York. Whether you are a beginner or advanced player or have never played chess, or are a parent of a player or would-be player, you will find something for you here. Dispelling all the myths about chess being too complicated or intimidating or uninteresting. We show blitz game and bughouse game variations. We list all the great benefits of gaming in chess. With instruction coming directly from the matches, we have a Tip of the Match for every game and a Tip of the Day for every episode. Watch to see how, what, and why. New episodes every month with new players. See if your team, your club or your school, friends or acquaintances are on this episode.

Posted by Mike Lionti - Chess Blog Editor at 8:39 AM No comments:

This has been a very cold week in Rochester! But, that did not suspend the chess games that were scheduled for the new Winter Chess League this past Monday, and then Wednesday night Community Chess Club of Rochester. There are some audio and video links in this blog post, so don't forget to check those out.

And for something FUN:

Here is the first of several installments of CBS Radio Mystery theatre productions that you can listen to and enjoy which feature CHESS as part of the plot. I will post a new one every week. Enjoy!

The first mystery title is THE CHESS MASTER:

"An uneventful game of chess with a stranger in the park leads to a world of adventure for an out-of-work advertising agent."

Published on Nov 12, 2013
First episode of Chess Match, new instructional chess show with instructor Ken McBride, guest instructors David Petty, Ryan Horst, James Hiltunen, Wendy Rifeng, Ron Lohrman, and David Phelps, and chess clubs & chess competitions from all over Rochester. Learn chess from the matches themselves, and about the people who love chess, young and old. This episode includes board setup and how the pieces move, an introduction to the time clock, a beginners match between Catherine Healy & Katherine Stein, a Tip of the Match, an intermediate players match between John Healy & Krish Thakkar, another Tip of the Match, the Benefit of the Day, and some bughouse from the Rochester Chess Center, the primary sponsor.

Check back here every week for another episode! Enjoy!
Posted by Mike Lionti - Chess Blog Editor at 5:04 PM No comments:


At the Community Chess Club of Rochester's (CCCR) Thursday night club meeting, we had 6 fearless chess players show up during the freezing cold Rochester snowstorm.


Here are the CCCR results for Thursday Jan. 2nd:

Here are the Saturday tournament results for Saturday Jan. 4th: