The 2020 CCCR Simul was held on Wednesday, August 26, 2020 at the Rochester Chess Center. In this post I will just briefly summarize the results and comment on some of the games and my playing strategy throughout the event. 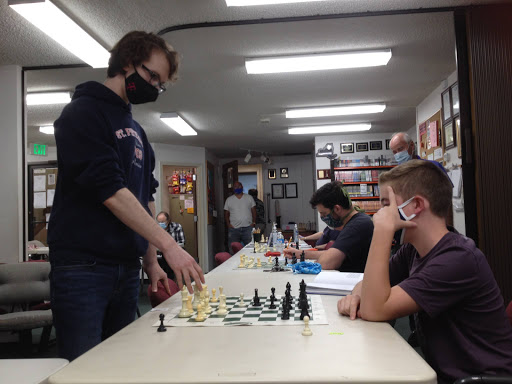 Even with the social distancing and safety procedures, we still were able to have 14 players with all spots filled! Although my opponents fought valiantly, in the end I managed to squeeze out 14 full wins after about 2 hours.

Many of the games were quite interesting! To start, let's have a look at what I think was the most instructive one. Coincidentally this was also the game where I felt like I thought the most:

I played the opening very quickly, but Ryan played well in response, getting a perfectly decent position with black after 15 moves. This may not sound like a big deal but it is an important step to making my life harder in a simul! In many other games I was able to get a superior or outright winning position from the opening and then convert the advantage on autopilot. When I have no advantage though, I need to think a little on how to pose problems for my opponent and induce some mistakes, which may mean taking some risks on my own position. Indeed, had Ryan found 16. ... c4!, I could easily have found myself in trouble.

Perhaps contrary to expectations, in most of these games I never calculated more than 4 or 5 half-moves ahead. The exceptions are notable though; in two of the games I did need to do some moderately deep calculation:

And the following game as well:

Finally, the last game I'll analyze here contains probably the most amusing moment of the simul: I flat-out missed capturing a free rook!

Probably for the best, I remained blissfully ignorant of my oversight until after all the games were done.

In what seems to be a new feature, chess.com offers some interesting statistics when analyzing games -- to close out I'll share this on the 13 games that we recovered the notation for:

Thank you very much to all participants and organizers! A lot of planning went into making sure this event would be safe and it was great to see the turnout that we had.

Today we get to look at a highly instructive game played at one of the Saturday tournaments here in Rochester. It is the encounter Beh - Manning, played on 08 August 2020.

The game started off roughly balanced after white's unusual 7.Bg5!? in the Queen's Indian. Later after the imprecise 13.Qc3?! black was able to use the bishops to open the position and get a good game. However, black proceeded to make two serious positional errors -- 19. ... cxd4? and 25. ... Bxe4?, which led his position from being better, to equal, and then to worse. A few moves later, already in a tough spot, 28. ... f5? was the last straw for black's position and white smoothly converted the advantage from there, using a classic "principle of two weaknesses" approach by attacking black's king while tying up his pieces to the advanced passed c-pawn.
Posted by Lev at 1:50 PM 1 comment: