When you ask most chess players about their opening repertoire, they typically respond with something relatively mainstream and well-respected, like "I play the Caro-Kann defense" or "I'm a lifelong Queen's Gambit player". But every now and then, we might like to mix things up and try an "experimental" opening over the board. I've certainly been known to do this on occasion - one of my personal favorites is the so-called "Hillbilly Attack" against the Caro: 1.e4 c6 2.Bc4!? d5 3.Bb3 dxe4 4.Qh5!? which I have actually played in rated games.

In some cases, you can even see grandmasters trying out an unorthodox opening, but mostly those games are played against much weaker players and at faster time controls. However, in some rare instances, you can catch a GM playing something truly outlandish ... against another GM ... in a classical tournament game. These can turn out to be some of the most exciting games of chess out there.

So, behold this collection of some of the most bizarre openings I've seen in GM-GM encounters.

(Warning: Try these openings at your own risk! Past results are not indicative of future results.)

#5 - Knight on the rim is dim brilliant!

#4 - This is how we play the English Opening in Armenia

After the opening moves 1.g3 e5 2.c4 black has many different main lines to choose from, however in the game Markowski, T. - Andriasian, Z. from the 2007 Rubinstein Memorial, the 18 year old Armenian grandmaster initiated a caveman-style assault on move two with 2. ... h5!? His opponent, Tomasz Markowski, a veteran Polish GM and former top-100 player, replied with an equally strange-looking knight tour, and the game continued 3.Nf3!? e4 4.Nh4 Be7 5.Nf5 d6 6.Nxe7 Qxe7 and after the further 7.Nc3 Nf6 8.Bg2 h4!? black was able to pose some difficult problems to white's king. Although Markowski did have a clear path to an advantage in the middlegame, he blundered and allowed the young Armenian to pull off a nice win.

For whatever reason, during round 3 of the 2018 Llucmajor Open held in the Mediterranean Balearic Islands, Spanish GM David Larino Nieto was not in the mood for any theoretical debates and started the game with 1.e3 Nf6 2.g4!? in Larino Nieto, D. - Sumets, A. His opponent, a strong Ukranian grandmaster, kept his cool with the modest 2. ... h6 and from there, white adopted a typical hedgehog-style setup with 3.Bg2 d5 4.h3 e5 5.Ne2 c6 6.b3 Nbd7 7.Bb2 Later on, the Spaniard got a little too adventurous with the brave 12.Kd2?! and Sumets ended up winning a long 53 move struggle.

#1 - If you haven't moved both your b and g-pawns past the fourth rank in the opening, you're doing something wrong

For our final game, the encounter Vaulin, A. - Sulskis, S. from the last round of a 1999 open tournament in Northern Poland quickly started off on a wacky note with the experienced Lithuanian grandmaster meeting 1.Nf3 with 1. ... b5!? Alexander Vaulin, himself an experienced Russian GM, reacted with his own queenside demonstration 2.a4!? and after 2. ... b4 tried to return to normal development with 3.g3. Sulskis was determined to create a mess though, and after 3. ... Bb7 4.Bg2 lashed out on the other wing with the novel 4. ... g5!? and reached a strange but playable position following 5.d3 g4 6.Nh4 Bxg2 7.Nxg2 d5 8.h3!? gxh3 9.Rxh3 Qd7 10.Rh1 Nc6. Despite some hair-raising complications near the end, Vaulin emerged with the full point after Sulskis became a bit too cavalier with his own king safety. 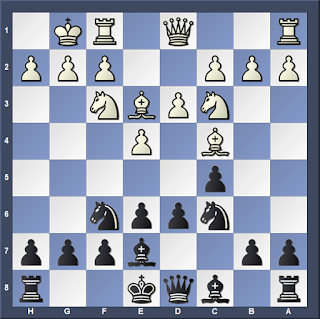 In the diagram above, you're playing black and it's your turn. Take a look at the position for a bit and then come up with a plan for your next few moves. Take as much or as little time as you think you need.

My ambitious goal in this new series of posts is to outline a general path for how one could go from beginner to master. I'll draw from my own chess upbringing along with some old-school classical wisdom.

Lastly but most importantly, I just want to remind you that it is absolutely possible to enjoy chess as a hobby without wanting to devote time, money and energy to improving. I learned the rules when I was around five or six years old but had no desire to get a rating or take lessons until I was twelve. Today, I have no regrets about that.

So, you've recently learned the rules and basic checkmates, perhaps a couple of simple openings too. What next? How to improve from there?

In my opinion, there are numerous ways for a beginner to improve that cost little or no money and do not require a large time investment:


Something else I would strongly advise is to stay away from engines like Stockfish, Houdini, Fritz, Komodo etc. You don't need them right now, and unless you know how to use them properly they will do more harm than good. Later on I'll make a post about how I use engines and how they are designed to work.

Now, if I had to pick just one of my bullet points to be the most important for beginners to learn, then in a heartbeat I'd pick tactics. Why? I'll come back to the diagram I showed you at the top to illustrate:

This position was black to move, and I asked you to come up with a plan. But in reality, it was a trick question (sorry). Whatever plan you came up with, it doesn't matter, because black can actually win a whole piece by force here.

The point of this exercise is to demonstrate that concrete tactics (especially any tactics involving an exposed king) will always be the most important factor on the chessboard and trump standard positional considerations.

For example, you could have looked at the position and said, "Black isn't castled and needs to develop his minor pieces, so my plan is 0-0 and Bd7 to complete development", or maybe you reject the idea of d6-d5 because "you shouldn't open the center when you haven't castled yet". All of that is true, but in this case it assumes secondary importance because you can win a piece.

If you quickly saw the tactic on your own, then that's good! If not, then you probably could use some tactics training, because the end goal is to be able to find those shots even when you're not actively looking for them. After you practice enough basic puzzles like that, your brain will eventually be able to automatically recognize those patterns without any effort. Experienced players like myself can instantly see things like that ...d5-d4 fork without even thinking.

If chess were a language, then tactics would be the alphabet. Strong players use the same basic tactical patterns in different combinations as a tool to help carry out their own plans and to stop their opponent's plans. The good news for beginners is that those patterns are actually really easy to learn! Just be consistent about practicing and going through puzzles until it becomes second nature.
Posted by Lev at 8:02 AM 1 comment: