Awards Night
will be held at the Rochester Chess Center
on Wednesday, Nov. 13th, 2019 at 7:30pm.
Please join us for the award ceremony.  Cake and coffee will be served.  The club's regularly scheduled chess games will follow the awards ceremony.
Click HERE for Photos taken at the Awards Night presentation on Nov. 13, 2019
A Special Thanks to Dan Burnside for taking these photos!

Congratulations to all the Award Winners! 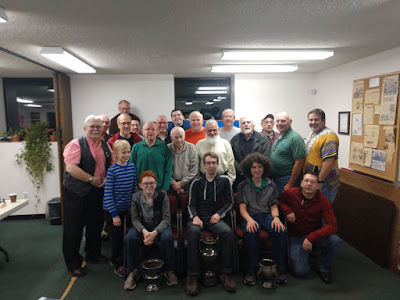 Click HERE for Photos taken during the 2019 Club Championship.
Please scroll down to see Lev's coverage of the CCCR Championship!

Coming up: The Adam DeSantis Memorial Tournament, Sunday Nov. 3, 2019. Contact the Rochester Chess Center for information and to register. Click here for Details. 1st round Sunday is at 9:30am.

Wednesday, October 2 marked the first round of the 2019 CCCR Club Championship! As usual, I will post my games here with commentary as the tournament goes. I will also try to feature other key games as the tournament progresses, especially any big upsets.

Round 1
In round one I had white against Dan Burnside. After a quick flash of tactics in the opening I emerged up an exchange in the ending:


In a big upset this round, Joshua Stevens won against Ken McBride - I managed to get a hold of that game as well:

Not a bad scalp for Josh! Such 500-point upsets are rare, but they do happen.


Round 2
Round two was held on October 9th, and the standings continue to narrow down. I played black against Jacob Snell:


Also this round, Toby conducted a nice attack against Hanan Dery, effectively demonstrating how to play the Closed Sicilian with white:

That was a convincing attack from white, but with more care in the opening black has nothing to fear against the Closed Sicilian! In particular look at my note on move 3.


Round 3
We saw the third round finish on October 16. There was plenty of excitement on the top boards with underdogs TJ Weaver and Toby Rizzo securing draws on boards 2 and 3, overcoming rating gaps of 250 and 150 points, respectively. On board 4, Jamshed won against Don Stubblebine.

My game against Peter Craig featured some interesting strategic decisions in the middlegame and then a tense finish under time pressure as I converted an extra piece in the endgame:


Here is the game from board 2 between TJ and Kharroubi:

A lucky escape for Clif - if white had decided to play on by taking on e6 the endgame looked hopeless down a pawn.

Round 4
Going into round 4, I was the only person with 3/3, so I played against the highest-rated 2.5/3, which was Clif. I was due black this game:

There were a few uneasy moments for me in the middlegame where white could have played bxc4 and opened the b-file, but after the critical turning point 18.g5? black was fully in control with 18. ... Rc8.

On board 2, Dave Phelps won with black against TJ, and Toby won with white against Jamshed on board 3. I have Toby's below - it was yet another brutal attack in the Closed Sicilian:

Ouch! Black was doing fairly well for most of the game up until his pieces strayed too far from the kingside, allowing Toby to crash through with a decisive attack.


Round 5
The final round of the 2019 Club Championship finished on October 30. There were many exciting encounters, including some big upsets. My own game against Dave Phelps was a well-fought struggle that went on until the bitter end:

Things were fairly balanced at first in that isolani middlegame, but 22. ... g5?! was a critical turning point after which the game started shifting in my favor. Still, several of my decisions can be criticized, especially 30.a5?

A funny thing to note - both of the critical turning points in my last two games were when my opponents played pawn to g5! Could this be a cursed square?

Definitely the most exciting event of this round was Henry's big upset over Clif Kharroubi:

Although black was nearly winning out of the opening, the queen sac with 22. ... Rad8? gave white newfound hope, and Henry played the long endgame well to convert, with both sides missing some tactical chances.

Also this round, Toby Rizzo won with black against Ken McBride to finish clear second with 4.5/5 points, and a master-level performance rating!

Here are the final standings:

Thanks to TJ Weaver for collecting and entering many of the tournament games which will be featured very soon in our club's Game Database.

Posted by Mike Lionti - Chess Blog Editor at 10:35 AM No comments: