Dr. Erich Marchand requested that his friends play chess in his memory.  Please Note: The date has been extended for late registration.  Add $20 to all EF if paid on the day of the event.

See the tournament flyer for all details including prizes and registration information: http://www.nychess.org

The Marchand is the largest Chess Tournament in Western New York!

In recognition of Women's History Month, the Rochester Chess Center proudly presented the 16th Annual Women's Invitational and Brittany Broan Memorial.  The event was held at the Rochester Center on Saturday, March 26, 2022.  This was the sixteenth annual all-female chess tournament.  It was held to celebrate the women who have opened the doors in this male-dominated sport and to encourage all those who follow in their footsteps to support and mentor other women.
Congratulations to all the Award Winners!
Thanks to all players for participating!
K-4 Section
1st Place: Lucy Jaramillo - won trophy and cash prize
2nd Place: Eleanor Eckert - won cash prize
K-12 Section
1st Place: Madeline Mark - won trophy and cash prize
2nd Place Tie: Olivia Premo, Ava Scahill, Maggie Hockenberry and Victoria Yao - all won a cash prize
Adult Section
1st Place: Arianna Kharroubi - won Onyx chess set and board, trophy and cash prize 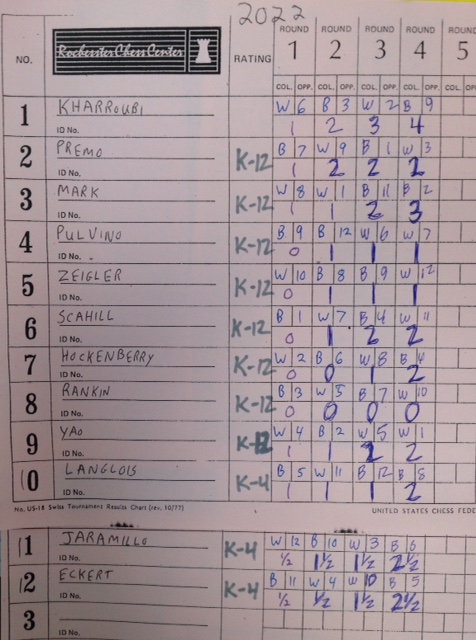 Vassily Ivanchuk, of Ukraine, is perhaps one of the world's most distinctive super-grandmasters. He is well-known for having a highly imaginative, creative and unique playing style, which has enabled him to score wins against the best players in the world throughout his career. When playing at his best, he was able to defeat world champions in staggeringly lopsided fashion.

One of Ivanchuk's most famous games is probably his win as a 21 year old against then-world champion Garry Kasparov in Linares, 1991:

Against any opponent, this game would have already been a brilliant display by the young Ivanchuk, but defeating Kasparov in such a way - at one point forcing all of the world champion's pieces to the back rank (move 36) - makes this game extra special. For decades, Kasparov was a master of using the initiative and piece activity to dominate his opponents. But here Ivanchuk flipped things around completely - this is certainly one of the most one-sided losses Kasparov has experienced as a world champion. Ivanchuk went undefeated that year in Linares and won the tournament with clear first.
Here I actually want to look at another, less well-known game that also demonstrates Ivanchuk's chess brilliance. Even though he was no longer at the peak of his career during this game, Ivanchuk still played at an extraordinarily high level and made things look easy against another future superstar, Sam Shankland:
Of course, our hearts go out to the people of Ukraine during this difficult time, and we should remember that chess is a big deal in Ukraine, just as it is in Russia. If you would like to donate to support Ukrainian chess players, please do consider this fundraiser organized by the United States Chess Federation, available here: https://www.gofundme.com/f/support-for-ukrainian-chess-players.
Posted by Lev at 8:04 AM No comments: