The 5th and final round of the 20th Annual Community Chess Club of Rochester (CCCR) championship took place Wednesday night at the Rochester Chess Center on November 2nd, 2016.   On the top board, Lev Paciorkowski (USCF rating 2310) won his game against 2014 CCCR club champion Webster Kehoe (USCF rating 2046) in a close game.  Lev finished with a perfect 5.0 score in five rounds.  With that win,  Lev became the 2016 club champion, succeeding Clif Kharroubi, the 2015 club champion, who finished with 3.5 points.

Both Lev and Webster have considerable experience playing big games as both play in many tournaments and have had many successes.  Lev and Webster are well on their way to higher chess ratings and more successes in chess tournaments.  Both Lev and Webster play on high school chess teams and are very active chess players, particularly in local tournaments.  Daniel Johnston (USCF rating 2114) won his game against David Campbell (USCF rating 1945) to finish with 4.5 points and achieve second place.  Webster finished with a 4.0 score and a second place finish by tie-breaks.  Rounding out the top 5, Matt Slomski took 4th place with 4 points by tie-breaks, and Ken McBride took 5th place with 4 points by tie-breaks.  Other prizes earned were as follows: U2000: David Campbell with 3.5 points, U1800: John Frearson with 3.5 points, U1600: Matt Nesci with 3 points, U1400: Hanan Dery with 2 points, and U1200: Steve Blazak with 2 points.

Upsets in the 5th round included Matt Nesci's win over Jamshed Ahmed in a very interesting end game, Mike Connelly's win over David Worl, and Mike Lionti's win over Bill Pollifrone.  The gallery has been updated with 5th round photos.  Please also visit and bookmark Jim Trowbridge's chess blog which has more coverage and chess games from this event.

The awards ceremony will be held at the Rochester Chess Center at 7:30pm on Nov. 16th and cake and coffee will be served.  Regular G/80d5 games will follow the awards ceremony.  The chief TD was Ron Lohrman, with assistant TDs Mike Runnells, Ken McBride and Mike Lionti.  We look forward to next year's annual CCCR chess simultaneous when Lev Paciorkowski will lead the Simul event.  Congratulations to Lev Paciorkowski on becoming the new club champion.  Also, congratulations to all our other prize winners.

Click here for the USCF rating report for the CCCR Championship. 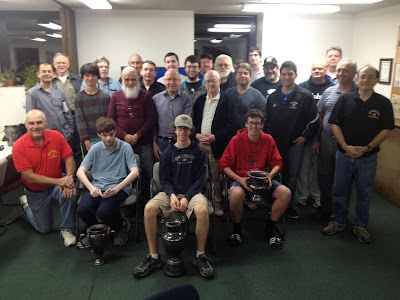 Here a complete summary of the tournament, prepared by Mike Runnells.

This document has links to plycount.com and you can see anyone's graph and history, even people you played years ago, and there is a USCF link for each player.  You can make it full screen by clicking on the symbol in the lower right hand corner. 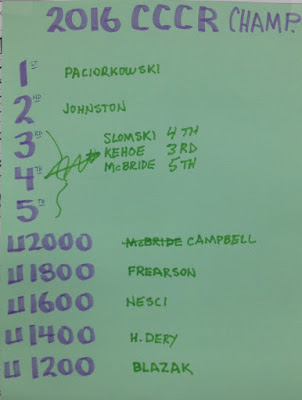 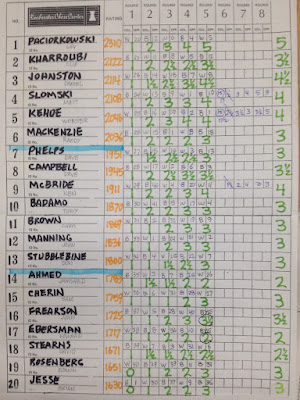 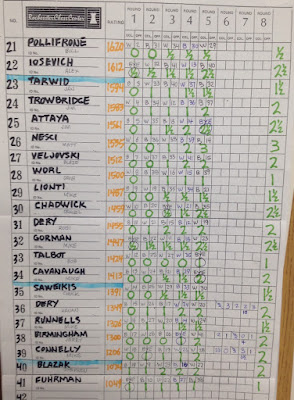 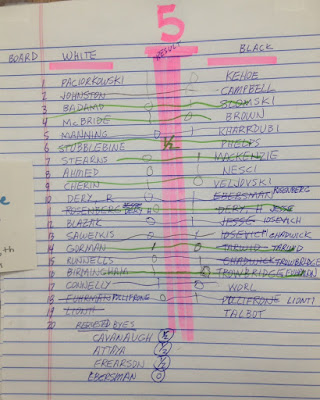 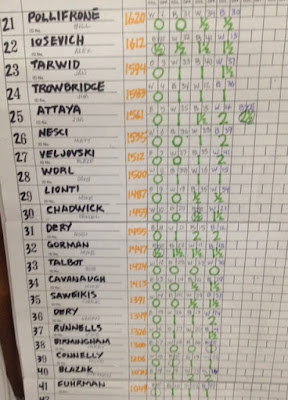 The third and fourth rounds of the 20th Annual Community Chess Club of Rochester (CCCR) championship were held, Wed. Oct. 19th and 26th, respectively,  at the Rochester Chess Center.  Round #3 and #4 photos have been added to the gallery link below.  Round #5 will be held at the Rochester Chess Center, 221 Norris Drive, Rochester, NY 14610 on Wed. Nov. 2nd, 2016.  Visitors and spectators are welcome.  Rated games can also be played which are not part of the club championship tournament.  Pizza will be provided for the players and spectators at 6:30pm.  This will be an exciting finish with Lev Paciorkowski paired with 2014 club champion Webster Kehoe on board #1, both players with perfect 4.0 scores up to this point heading into the final round.  Please visit and bookmark Jim Trowbridge's Smoke The Pawn blog to see many games and posts for this chess club championship and other interesting posts.  Here are the preliminary pairings for the championship final round:

Scroll to the photo gallery link below to see the Cross Table. 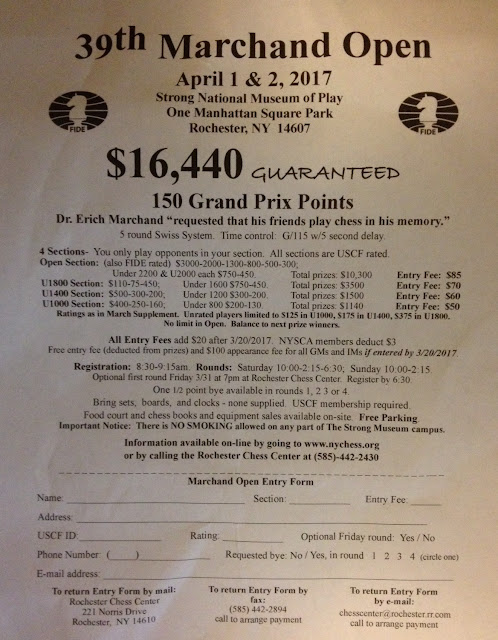 Please take a moment to visit Jim's blog for lots of chess games
covering the 20th  Annual CCCR Championship and much more...
Click here or on one of the images below... 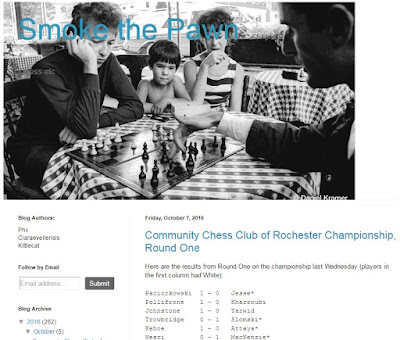 The first round of the 20th Annual Community Chess Club of Rochester (CCCR) championship was held last night, Wed. Oct. 5, 2016 at the Rochester Chess Center.  Thirty nine players participated in the first round.  Last year's champion, Clif Kharroubi won his first game against Bill Pollifrone.  There was only one upset with Steve Blazak winning his game against Edwin Rosenberg.  Jim Trowbride is collecting games from the tournament and several will be posted online on his blog - Smoke The Pawn - and in the quarterly journal Empire Chess published by the NYS Continental Chess Association.  Some games will also appear here in this blog.  It was a full house at the chess center with another 6 players also in attendance playing rated games that were not part of the championship tournament.  The games are G/80d5 USCF-rated and are in the Swiss format.  Ron Lohrman is the tournament director.  Other TDs are Ken McBride, Mike Runnells and Mike Lionti.  The second round of the championship will take place on Wed. Oct. 12, 2016 at 7:30pm.  Some photos are available for viewing by clicking on the camera link below.  Spectators and visitors are welcome, and several were present for the first round.  Snacks and beverages are complimentary and included pizza during the first round.  This is a five round tournament, which concludes on Wed. Nov. 2, 2016. 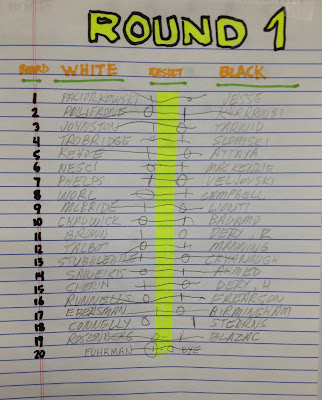 Round #1 of the Community Chess Club Championship
October 5th, at 7:30 pm
at the Rochester Chess Center.  Registration ends at 7:15 pm.
Visitors and Spectators are welcome.  Pizza and snacks will be served.
Scroll down for the tournament flyer. 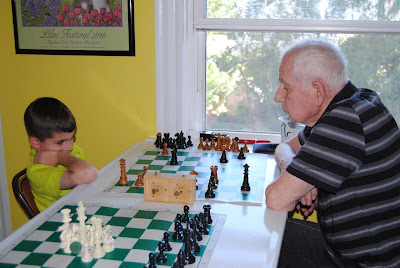 138th New York State Championship!
Once again, this year's championship was held at the Marriot in Albany, NY.  There were 38 players in the Open Section and 208 players overall.  One of our own Rochester players, Lev Paciorkowski, had a brilliant tournament. Lev was on board #1 for the final round, tied for first place.  Lev (2294) did not win the final game against Aleksandr Ostrovskiy (2490), but nonetheless finished with an excellent 4-point score in the Open Section.  Lev's USCF rating also jumped from 2294 to 2303 which is another fine achievement.  The chess club would like to extend congratulations to Lev Paciorkowski for an excellent performance at the NYS Championship.  One of his games from the 2016 NYS Championship is posted below.

Click HERE for the USCF link to the 2016 NYS Championship tournament results.

Tournament Announcement:
The Community Chess Club Championship
Starting Wednesday, October 5th 2016
The annual Community Chess Club Championship is coming up in October.  Clif Kharroubi is the defending chess club champion.  Scroll down in the blogs space for details given on tournament flyer.  Sign up at the Chess Center.  Entry fee: only $5, and bring snack to share for one round (or $5 toward snack).  Over $1000 in guaranteed prizes! 6 Game pre-requisite.  Details at Chess Center.  This is the second biggest annual local tournament!  If you are not a club member, visit out club and and play some chess with us.  We play Wednesday at 7:30pm (G/80 d5) and registration is between 6:30pm and 7:20pm.  We would be happy to have you come play some chess with us!
Non-tourament games can also be played while the championship is in-progress.

Here are some other great local tournaments coming up: 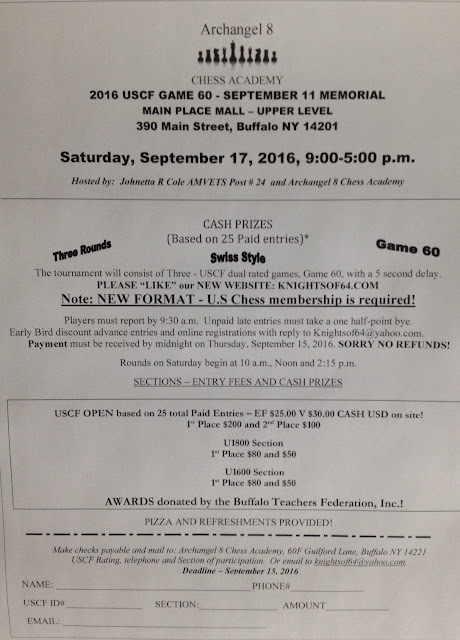 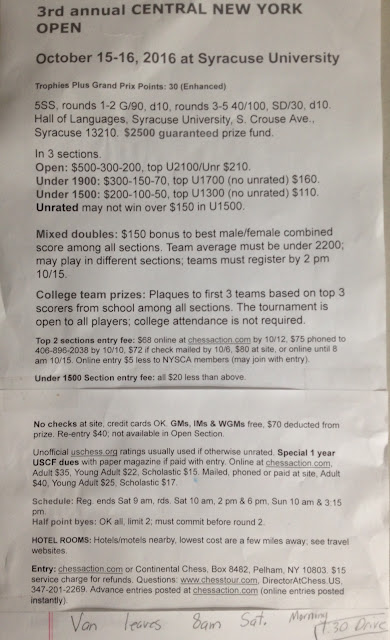 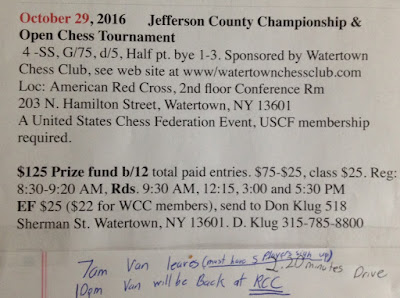 Here are some recent photos from the Chess Center.

The Rochester Chess Center will be closed on Labor Day Weekend
(Saturday - Monday) and will reopen on Tuesday Sept. 6th.

We are very happy to welcome back Laszlo Tapaszto.  Laszlo will be playing on Wednesday nights with the Community Chess Club for the next several weeks.  Laszlo will also be playing chess
on Saturdays.

Coming this Labor Day weekend is the NYS Championship in Albany.
For more information about this tournament, scroll down for the TLA or click here.

Another tournament coming soon is the 3rd Annual Central NY Open to be held at Syracuse University, Oct. 15-16, 2016.  Click here to visit chesstour.com to get more information.

SUMMER Chess Camp at the Rochester Chess Center!
Scroll down to previous post for more information, or call 585-442-2430.

The Chili Chess Club will award the Club Champion Medal and start a new ladder. There will be a special, one time only, second place prize too.  On the new ladder everyone starts with a rating of 800.  See Adam or Fred at the Chili Library for more information.

During the weeks of the club championship, regular rated games
can be played for individuals not participating in the championship.

Mixed doubles bonus prizes: best male/female 2-player "team" among all sections: $600-300. Team average must be under 2200; teammates may play in different sections; teams must register before both players begin round 2; teams including an unrated cannot win over $300.

All: Online entries $7 less to NYSCA members. NYSCA dues $12/yr with 2 issues of Empire Chess or $20/yr with 4 issues; join or renew together with entry.

More tournaments & Activities will be listed soon.
Posted by Mike Lionti - Chess Blog Editor at 5:49 AM No comments: