My Games from the New York State Open

The 27th New York State Open was held in Lake George from 5/17-5/19. Despite my typically suspect play, I managed to tie for first, so let's have a look at the games.

In round 1 I played a pretty low-quality game but was able to win a drawn major piece endgame against an 1800 player.

My 11.h3?! squandered any hopes of an advantage with white, and after 19. ... Qa8 the game was completely even and should have ended in a draw. The biggest mistake black made was actually trading rooks, because it severely limited his chances for counterplay - this is a good rule of thumb to remember by the way: the side with an outside passed pawn almost always wants trades; the defending side should avoid trades. This is especially true in major piece endgames.


In the second round, I got a dream position out of the opening with black against an expert:


In round 3 I had to grind down a resilient class-A player. Compared to my first round, this was actually a high-quality game where I was satisfied with the way I played.


In round 4 I played a young expert, and made a disastrous blunder in the middlegame after following through with a bad plan.

Suspicious opening choice, but the reason I lost that one was the strong desire to avoid white's idea of trading pieces with Nd5, so much so that I was willing to put my rook on the horrible c5 square, and I completely overlooked 26.Bd8

In my defense, that same kid also drew the other master in the tournament the following round, so I didn't beat myself up too badly. In any case, I made things a little better by getting a fast win against another expert in the last round.

My next tournament probably won't be for a while, so until next time!
Posted by Lev at 1:17 PM No comments:

Recent Events at the Chess Center 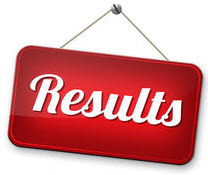 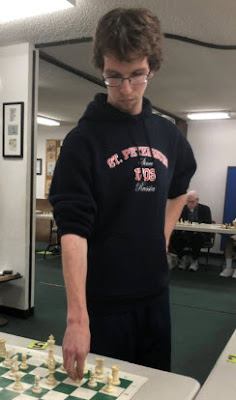 My Games from the Maryland Open

Over the weekend I played in the 65th Maryland Open in Rockville, MD. The theme for me this tournament was opening disasters! In all three of my black games I misplayed the opening, and as usual there were plenty of adventures...

I played in the two-day schedule, where the first two rounds were G/45+30. In round one I got black against GM Alexander Fishbein, who I've played a few times before. I've recently started learning the Classical Sicilian, a new opening for me, and was happy to get a chance to try it out against a good player. We had a long but instructive struggle, where both of us made several mistakes.

Almost 100 moves! I think I've only had two tournament games against GMs that went over 100 moves - one where I was pushing for a win in a rook and pawn ending against Shabalov (but drew) and a 133 move draw against Vladimir Belous where I had to defend RB vs RN+P.

To summarize this game:

We finished about 15 minutes before the next round started, so I had no time for lunch, but thankfully my next game was not quite as strenuous.

A relatively smooth win against a lower-rated player. I only made one bad decision with 11.Bxc6?! after which I had no advantage out of the opening. However, my opponent later failed to take the opportunity to correctly set up his hanging pawns with 17. ... c5!, and instead chose 17. ... Rfe8?!, allowing my knight on a4 to come back into the game from c5 to d3. He ultimately tried to get activity with the speculative 18. ... Nh5!? and 19. ... f5 idea but it backfired horribly as his own king proved to be weaker.

In round 3 we switched to the long time control of 40/90 SD 30 + 30 sec/move. This game was quite a scare for me, as my careless opening play against an expert quickly landed me in a disastrous position.

This game is a good example of how too much knowledge can hurt you in chess! I have a lot of experience in Sicilian and English Hedgehogs, so I know how dangerous white's attack can get if black plays too passively. I certainly know how dangerous Nc3-d5 can be, especially if my king is still in the center. In this particular game though, the Nd5 lunge, although a good move for white, would not have been winning, and I incorrectly just assumed it would be without analyzing concretely. It would have been far better to allow Nd5 than to destroy my position with a move like 9. ... h5?!, embarking on the Nc6-e5-d7 maneuver at all costs.


In round 4 I had white against the young up-and-coming expert Alex Chen - I had done a bit of research on him and seen that his rating had been going up quickly and I think he had drawn a GM last year, so he was certainly dangerous. Therefore, I played 1.e4 and headed for the sharpest Sicilian possible...

...just kidding. I did play 1.e4, but quickly steered into an endgame where I outplayed my less-experienced opponent.

By the way, that 9.e5!? idea is not mine, I think credit should go to Vladimir Onischuk, who was the first GM to play it in 2014. He's won every single game with it, including three against strong GMs, so it's clearly not so bad!

Even though I didn't get to use that tricky sideline, my strategy of going to the endgame worked well - on moves 17-20 my opponent clearly didn't know what to do, and spent a lot of time on strange moves like Rd7 and then Rc7. Just one bad decision with Nd5-b4-d3 was enough to land him in trouble, and once I won the e5 pawn and invaded with my rook to the 7th it was all over.


In the last round I drew a master with black - I was actually lucky to get this draw too after misplaying the opening again.

So definitely my 10th and 11th moves weren't very good - 10. ... b5! instead of 10. ... Bb7 would have been a more active way to continue. I thought I could just develop naturally and play for ...c5 and be fine, but instead I just got a passive position and had to defend for the rest of the game. Probably I should study that opening line a bit more before playing it again, or find something sharper to play with black against lower-rated players!

Anyway, my next tournament is probably the New York State Open in a couple of weeks - I'll make another post about my games from that tournament too. After that, get ready for my simul on May 22! I'm planning to crush you all :)
Posted by Lev at 7:16 PM 3 comments: