The time has come once again to choose a game of the month to annotate. I reviewed many good submissions, but in the end I just had to choose the game which featured a tense positional duel with a tactical finale for the best instructional value. Let's dive in deep here and see what we can learn. 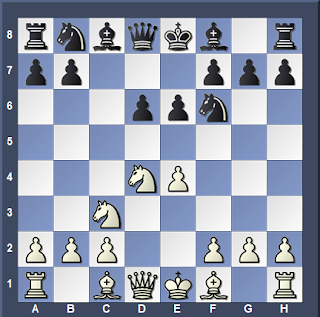 For those who are unfamiliar, this type of Sicilian where black quickly sets up pawns on d6 and e6 is called a Scheveningen, named after a small town in the Netherlands where this was popularized in the early 1920s.

Alternatively, the Keres attack with 6.g4 is the "big boy" move here, but it is unnecessary to go into its complications here. The text move is more in keeping with the old classical rules of development.

I see many club players in this situation play 7.Nxc6?!, which is generally inferior because after 7. ... bxc6 black captures towards the center and can later start steamrolling with e6-e5 and d6-d5.

However, it's also worth noting that the knight on b3 is a very poorly placed piece - all it can do is go backwards to d2! For this reason I would play 7.Be3 instead, developing while protecting the Nd4. There is no immediate ...Ng4 to worry about. 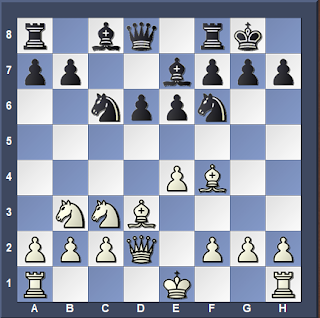 There's nothing wrong with this move - it's perfectly thematic - but usually I like to be a little more developed before playing this break. So I would play a6-b5-Bb7 first and then from there things like ...Nc6-b4 and ...d6-d5 become more attractive.

There was also nothing wrong with 10. ... Nxd5 11.Nxd5 Qxd5= either. Black's decision to accept an isolated pawn makes the game much more interesting.

White does well to castle before his king in the open center becomes a target. 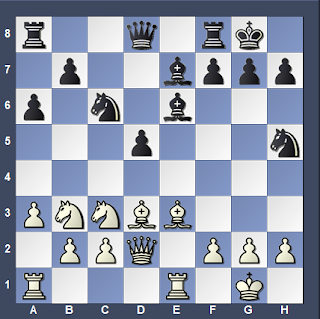 OK, let's pause here. We've developed the pieces and castled, but now what? I think many club players feel a little lost when it comes time to make a concrete plan for the middlegame.

So let's suppose I was playing this position with black. How would I go about evaluating the situation and coming up with a plan?

The first thing to do is take stock and figure out what's important about the position. From there, we figure out what both sides want to do and then come up with concrete maneuvers.

To my eye, there are three factors here which stand out as the most critical:

1. Black has an isolated queen pawn (IQP). Generally speaking, this means that white should want to exchange pieces while black wants the exact opposite - to avoid trades.

2. No pieces have been traded yet. That's very good news for black. More pieces means more opportunities to cause mayhem.

3. Black has some weak squares on the queenside - namely b6 and c5. This is the only bad news for black, and if not for this I would say white was slightly worse.

Taking all this into consideration, I'd say the position is about equal with mutual chances. A promising plan I see for black could actually be to target white's kingside and generate some attack - after all, the knights on b3 and c3 are far and away on the other side of the board, and we already have our knight roaming around on h5. I'd start with Qc7+Bd6, and if g2-g3 then f7-f5-f4 would cause some serious havoc. Ra8-e8 fits in there somewhere to complete development.

All that being said, let's come back to the game and see what happened.

It seems like black just overlooked white's next move. Usually in these kinds of positions, this exchange actually benefits black. Long-term, the Be6 is black's worst minor piece - it does nothing to help defend the weak dark squares on the queenside and can't control d4. All it can ever really do is defend the d5 pawn, which is a pathetically passive role. 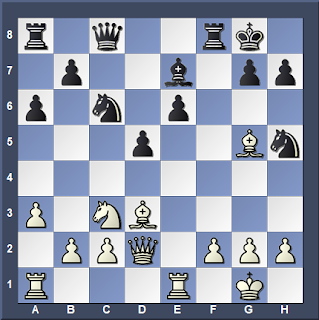 17. ... Nf6 There was also an interesting opportunity to agree to white's demands with 17. ... Bxg5!? 18.Qxg5 so that we can play 18. ... Nf4! and get some counterplay on the kingside. It's unclear if it amounts to anything concrete, but I prefer that to this passive retreat.

18.Qe2!? Perhaps overlooking black's next tempo move? 18.Na4 was still a good option, as black's queen is tied to the defense of e6. 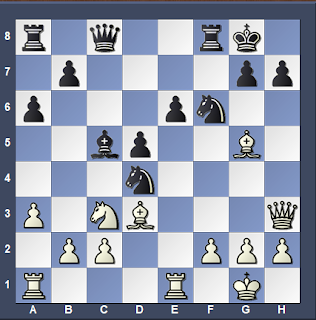 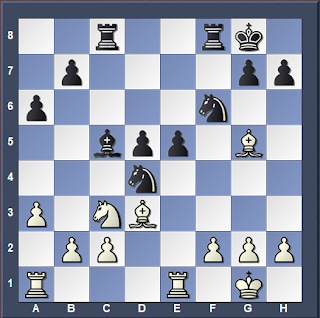 Although we've traded queens, there are still a lot of tactical elements to resolve here. White has to choose between Rxe5 and Bxf6-Nxd5. The correct answer can only be determined through hard calculation. How do you actually go about working through the numerous variations though?

Although I normally don't detail my thought process in this much depth, I'll be fully transparent just this once and show you what it actually looks like...

Bxf6 is the first move I look at. Rxe5 looks like an immediate mess after Ng4, so I'll come back to that later if I need to. After 22.Bxf6 black cannot simply recapture because then 23.Nxd5 and white is doing great. So that means he has to do something complicated...probably 22. ... e4.

22.Bxf6 is looking more and more attractive - I have a safe pawn-up endgame that I can comfortably press in. I'll take that; I don't really want to deal with the complications in the other line.

So in the end, I would play 22.Bxf6, which indeed is the best move for white.

Now of course, I don't hold two club players to the same calculation standards here :) Instead, the actual game went:

Even though the players were both rated under 1600, there was still a lot to get out of analyzing that game! Overall very well-played; I enjoyed going through it.
Posted by Lev at 7:34 PM