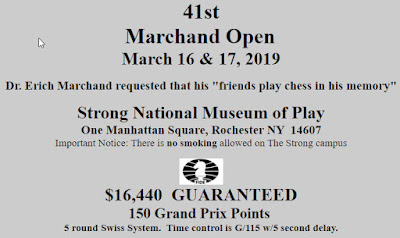 The 41st Annual Marchand Open was held in downtown Rochester, NY at the Strong Museum of Play on March 16-17, 2019. Fortunately, there was not too much snow for participants travelling from far-away locations, but it was a cold weekend. This year's Marchand had a record-breaking 177 players including a large contingent from Canada! In the OPEN Section, GM Alexander Fishbein and GM Bryan Smith tied for first place. Our NYS Champion, Lev Paciorkowski, will be posting games and analysis in the near future.  Thank you to all the participants and spectators who attended the tournament.  Due to construction at the Strong Museum of Play, next year's Marchand will be held at a different location in Rochester.

The Chess Center hopes to see you again next year for the 42nd Annual Marchand Open. 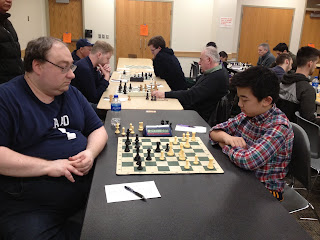 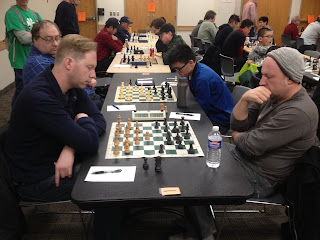 Here are the Prize Winners of the 41st Marchand:

The NEXT big Event coming this Spring to Rochester, NY
will be the Annual CCCR Simultaneous with our
Club Champion Lev Paciorkowski.

Posted by Mike Lionti - Chess Blog Editor at 6:49 AM