Round 1 of the 2020 Club Championship was held last Wednesday on 10/07. This year I'll be spotlighting one game from each round (typically an upset) and analyzing it.

Even with many of the boards seeing large rating disparities in round 1, we had at least two very significant upsets, one of which I've gotten the game score for.

The second upset I know about was Shaffer's draw against Stubblebine, another roughly 600 point rating gap. Here is the notation for that one:
A very back-and-forth struggle, where white won a pawn in the opening, then black won the pawn back, and in the RN vs RB ending black was surely winning most of the way before losing the queenside pawns. In the final position, white is actually winning the king and pawn ending since black's king is held back on the kingside!
On the top boards, the higher rated players generally prevailed, with David Phelps winning as black against David Lusignan on board 4 and Peter Craig winning against Aidan Kharroubi on board 3. Clif Kharroubi won by forfeit on board 2 and I won my game against Arianna Kharroubi.
Below are some of the other games I was able to get the notation for this round - here is Attaya - Rizzo from board 6:
And Lusignan - Phelps from board 4:
Finally, here are the standings after the opening round: 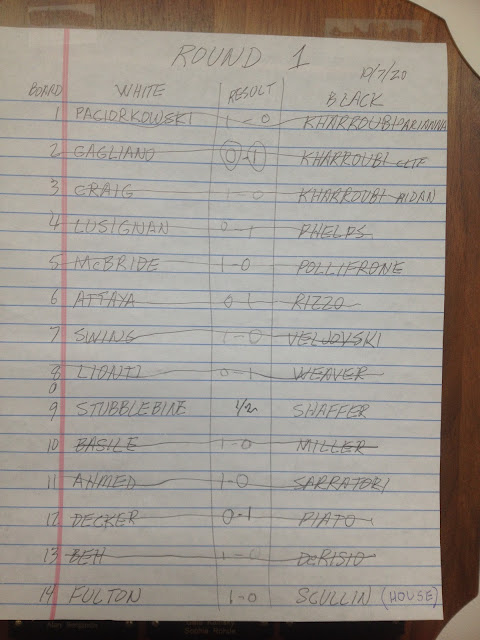