My Games from Seneca Lake 2018

The 2018 Seneca Lake Open was held on Saturday, November 10th in Geneva, NY. The Open Section of the four-round tournament finished with a two-way split for first place between myself and the #2 seed, FM Robert Sulman. The top five finishers are shown in the crosstable below. 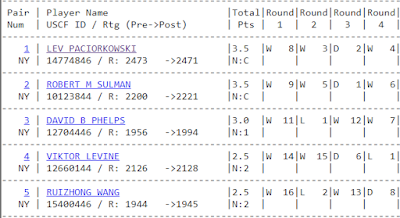 Overall I cannot really say I played too well, but in any case let's look at the games and see what happened.

Round 1 - I play white vs. Chris Brown (1928)
In the first round I happened to be paired with a fellow Rochester player. Chris Brown is a regular on Mondays and Wednesdays and was on board 2 in the final round of the Club Championship earlier this year.

Round 2 - I play black vs. David Phelps (1973)
In round two I got paired with another regular Rochester player. This is my first game against Phelps in quite a while - I think it's been at least a year since we last played.

In round three I played the #2 seed FM Robert Sulman. I chose a relatively meek opening with white and my opponent skillfully achieved full equality early on. Because I got no advantage out of the opening I took some unnecessary risks to play for a win in the middlegame. That backfired and in the end I had to prove my defensive skills to avoid losing a much worse position.

Definitely not one of my best games, but this served as a good test of my defensive abilities, which luckily were just good enough to salvage a half point out of that mess.

Round 4 - I play black vs. Viktor Levine (2126)
My last game against the expert Viktor Levine was an interesting long struggle which ultimately was decided by a blunder in time pressure.


Sulman also won his last round game against Anna Levina to also reach 3.5/4, so we tied for first place. Not a wonderful tournament for me (I even lost a couple rating points), but at least I avoided a disaster by saving a half point in round 3.

Stay tuned for more posts and updates!
Posted by Lev at 8:16 PM