Imagination in chess is all about finding unexpected resources that catch your opponents by surprise. I was feeling inspired, so today I'm sharing a cool example from one of my own games that I played some time ago online (the time control was G/45 + 15 sec/move).

We will join the game from the following position (I am playing black):

The opening is coming to a close and already we have an unorthodox position. My development setup is a bit odd, but there is significant pressure against white's center. Before trying to decide what to play, let's first answer one simple question to understand the situation better: What does white want here?

This one question is actually all you need to answer in order to get to the heart of this particular position.

In reality the answer is quite simple: white would like to finish development and castle with Bf1-e2 and 0-0. Once that's done, he can start thinking about pushing d4-d5 to gain some space and push black's pieces around. Once white is fully consolidated, black's various structural deficiencies like the doubled f-pawns and isolated h4 pawn can become serious weaknesses. Also, black's king will struggle to find a good home. Castling kingside hangs the h4 pawn and going queenside will leave white perfectly situated to launch a pawn storm with b2-b4-b5. Black's minor pieces won't be able to defend the queenside easily, while both of white's bishops are perfectly lined up in that direction.

In other words, white wants to consolidate. If white finishes development and coordinates the pieces, then in the long run black is just going to be in trouble. What does this mean? It means black should do something active now! Already we can rule out slow ideas like Qd8-d7 followed by long castling. Just to illustrate how badly that can go, consider this continuation from the diagram:

If we go back to the first diagram, there's actually only one move I seriously considered, which I played after about 4 minutes of thought.

16. ... f4!? A mostly intuitive sacrifice. Throwing this pawn forward is the only way black can threaten anything in white's position, and the bishop on f5 now has an open diagonal. I wouldn't call this move imaginative yet because it's black's only real idea in the position, but let's see what happened next. White's response is forced: 17.Bxf4 Nxf4 18.Qxf4 (D) 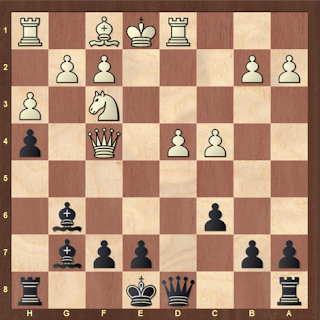 Now those bishops look fantastic and black has something to work with. But white is up a pawn, and still wants to consolidate with Bf1-d3 and 0-0, after which black will once again be in trouble. So just like before, we have to keep making threats to continue the initiative. Knowing this, there are three moves we can consider that attack stuff: Qa5+, Bh6 and Bc2. 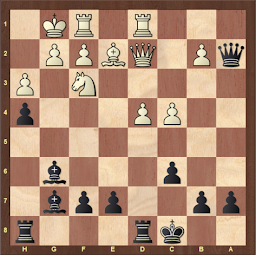 Suddenly the open a-file will benefit white! The threat of Ra1-xa7 is awkward to meet, and the queen will take many moves to get back into a useful position from a2. Once again, black's bishops look very nice but are not hitting anything and even block the g-file for the rooks. White has a serious advantage.

So that means 18. ... Qa5+!? 19.Qd2 Qxa2? is no good, and I wouldn't want to exchange on d2 either, since trading queens will just let white escape into an endgame a pawn up. OK, no problem, black has another intriguing resource in the position besides the queen check: 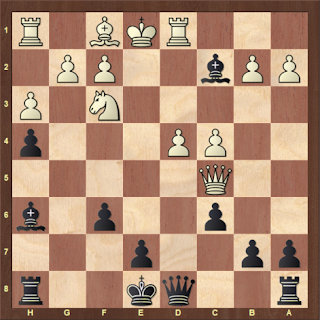 Making an awkward threat against the rook, which has only one safe square on a1. Here we should notice some tactics - for instance 21.Qh5+?! might look tempting at first, but after 21. ... Kf8 black now threatens Bd2+! winning the queen and is still hitting d1, so white loses material.

In the game white played the natural 21.Ra1?! (D) which leads to the exercise position at the top. This is where the real imagination starts happening! If you haven't yet taken a crack at finding black's idea, then I would encourage you to go back and try it out. 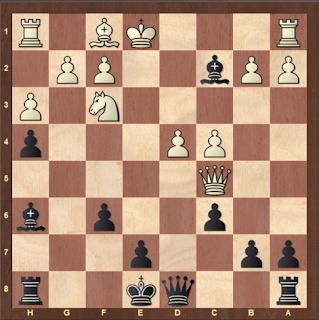 The first thing we should notice about this position is that white's queen is extremely vulnerable on c5. Therefore, the first move I considered was 21. ... Bf4!?, with the fairly obvious threat ...Bd6 trapping the queen. However, this move doesn't attack anything else and gives white time to retreat 22.Qb4 after which the plan is once again to consolidate with Qc3, Bd3 and 0-0. I didn't like that, so looked for some other options. 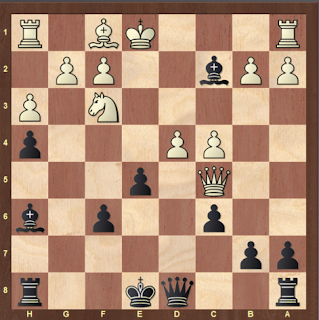 This one caught my opponent completely by surprise, as it just looks so ridiculous. With the king on e8, black willingly opens up the center! Chess is a concrete game though, and in this case the trapped queen on c5, plus my ability to play ...Qa5+ is more important than anything else. The threat is ...Bf8, which wins immediately. Even after 22.Nxe5? black still plays 22. ... Bf8!, when 23.Nxc6 Bxc5 24.Nxd8 Bb4+! saves the bishop and wins for black.
22.dxe5? The losing move. In a practical rapid game, I would call this position basically lost for white, since it is basically impossible to find the engine defense with just 10 minutes on the clock. Apparently, only 22.Qa3! still survives - my plan against that was 22. ... e4?! 23.Nxh4 Qxd4 (D), which looks like a crushing initiative for black. 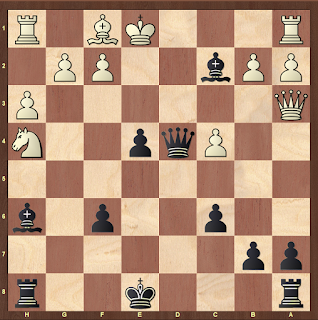 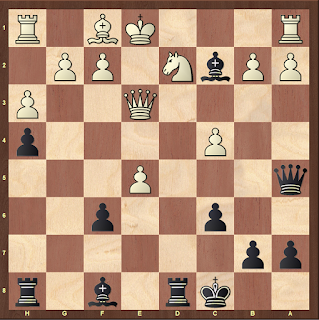