My Games from the 2018 CCCR Club Championship!

The 2018 CCCR Club Championship is underway with five rounds being held every Wednesday from 9/26 through 10/24. I will be continually updating this post after each round, adding my most recently played game.

Round 1 - I play white vs. Joshua Stevens (1400)
As chance would have it I ended up having white in the first round against Joshua Stevens, a regular to the chess center and one of the players who drew me in the simul I gave earlier this year (congratulations!); however, when I have only one game to focus on instead of about 30, I do tend to play a little better...let's see how the game went.

1.e4 d6 2.d4 Nf6 3.Bd3 This is not the typical move here (3.Nc3 is more standard), but I was looking to play an easy system with a pawn on c3 when I can maneuver the queenside knight with Nb1-a3-c2-e3 in semi-Ruy Lopez style. 3. ... Nbd7 4.Nf3 e5 5.c3 As advertised. 5. ... c6 6.0-0 h6 Going for an ambitious kingside expansion with g7-g5, the point of which is to constantly have ...g4 looming to remove the defender of d4 and also to play maneuvers like Nf8-g6-f4 later. Such a policy is decidedly risky though while the king is staying in the center. 7.Na3 I just go about my business, intending a maneuver like Na3-c2-e3-f5. 7. ... b5 A typical queenside expansion, but such committal moves should not be played with the intention of also advancing on the kingside with g7-g5, since if you push your kingside pawns, then your king will probably have to castle queenside where ideally you want to keep your pawn structure closely-knit together. 8.Nc2 (D) Black is not making any threats so I just continue with my maneuver. I am not sure where I want my dark-squared bishop yet so I keep him back home - maybe I will play b3 and Ba3 at some point. 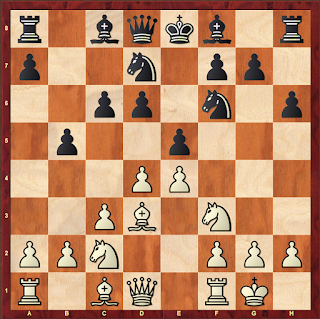 8. ... Qc7 9.Re1 Continuing to improve my position - the X-ray of rook against king may open up some tactical opportunities later on. 9. ... g5? Although I understand the ideas behind this move, I still consider it a serious positional mistake in this specific position - the entire concept of starting an attack without proper development is inherently flawed and furthermore the newly created hole on f5 is a serious problem. 9. ... g6 and 10. ... Bg7 was better and probably what I would have played instead. 10.Ne3 this and my next move are obvious and easy to play. 10. ... Be7 11.Nf5 Nf8 (D) 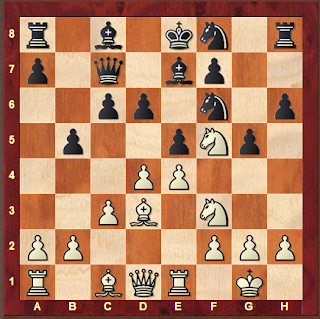 12.b3?! Although this doesn't spoil anything, I simply missed that 12.Ng7+ Kd8 13.dxe5 wins on the spot since 13. ... dxe5 allows 14.Bxb5+ with a discovered check and a decisive advantage for white. But why did I miss it? Because I actually wasn't even looking for any knockout blows here! My firmly ingrained positional instincts tell me to develop the rest of my pieces before looking to take decisive action, so I just banged out b3 and Ba3 without much thought. 12. ... Ng6 Now black has f8 for his king so Ng7+ is not as strong. 13.Ba3 (D) 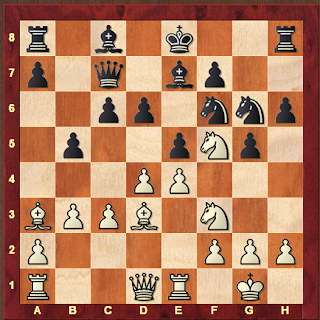 13. ... Bxf5? It's admittedly a very difficult position for black - I'm not sure if white is actually threatening anything here (Nxe7 followed by Bxd6 and then dxe5 would be the kind of knockout blow I would look at in the diagrammed position for white), but likely there isn't a satisfactory defense - the weakness of d6, f5, along with the bad king for black makes this position nearly lost in my opinion. 14.exf5 Now my Re1 comes into play with tempo. 14. ... Nf4 15.dxe5 dxe5 16.Rxe5 Stronger than capturing with the knight, since I have an immediate threat. 16. ... N4d5 16. ... N6d5 loses instantly to 17.Bxe7 Nxe7 18.f6. 17.Bxe7 Nxe7 18.Qe2 (D) White has a winning position after any reasonable move, but this is the strongest, keeping black's king in the center by attacking the pinned Ne7. 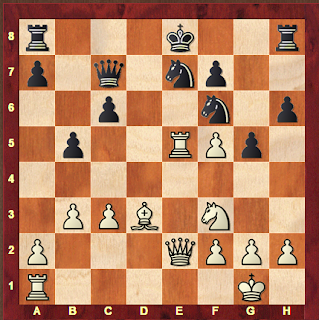 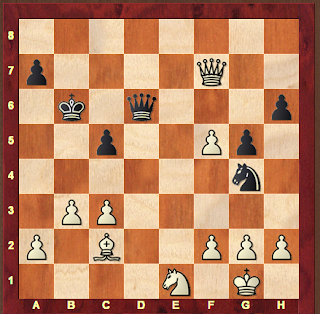 Exercise 1: White is of course winning after any reasonable move, but I'll give you a chance to play like Stockfish here and find the strongest continuation - if you go by computer evaluations the engine actually announces mate after this move while the alternatives are "only" +10. I'll add the answers at the very end of the post when the tournament is over. In any case I ended up winning this game without any problems. 1-0

Round 2 - I play black vs. Hanan Dery (1690)
In round 2 I got black against Hanan Dery, also a regular player on Monday and Wednesday nights. The opening quickly started off on an unusual note. 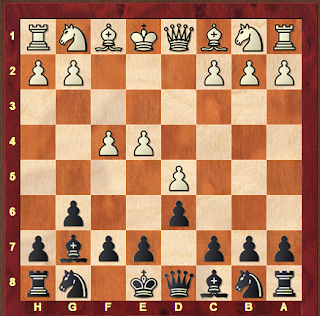 This is 100% a move I would never play if I had white here, as it is inconsistent with f2-f4 and opens up the long diagonal for my bishop. Rather, Nf3, Bd3, 0-0 and a quick e4-e5 would be the most dangerous continuation for black to face. I can immediately start attacking white's center with my next move. 4. ... c6! Principled and strong; already I would say white has no advantage out of the opening. 5.Bc4 Nf6 6.Nc3 0-0 It is possible that I can already win material with ...b7-b5-b4 removing the guard of the e4 pawn but I saw no need to complicate things - my development plan was pretty much on autopilot. 7.Nf3 Nbd7 8.0-0 Qc7 9.Be3 (D) 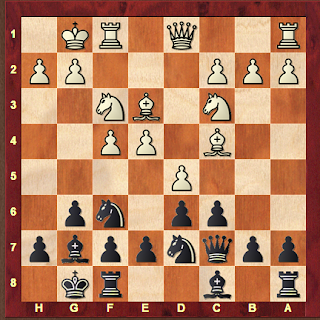 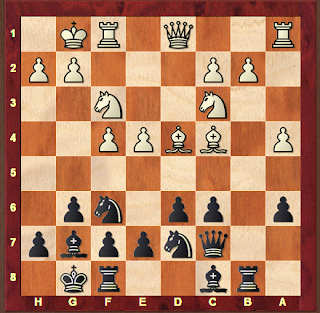 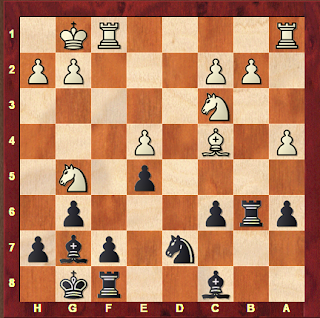 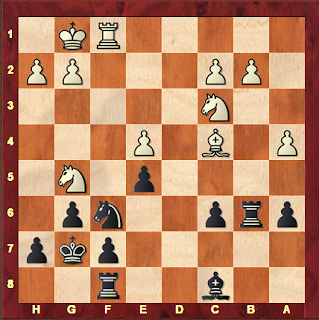 21.Rxf6 A fancy sequence that wins a pawn but unfortunately it results in further exchanges which makes black's winning task easier - 21.b3 was the best way to try to hold with white. 21. ... Kxf6 22.Nxh7+ Ke7 23.Nxf8 Kxf8 24.b3 Now we reach my favorite part - the technical endgame phase! Although I played through the rest of the game relatively quickly there are a lot of nuances behind the scenes that are instructive to point out. 24. ... Ke7 I debated a little on whether to play ...a6-a5 but was concerned with providing an easy target for a future knight on c4 - my biggest weakness is my split pawn structure on the queenside - the only hope white has is to somehow win either a6 or c6 and create a passed pawn, so I don't want to make that easy to do. Of course, if I don't play a6-a5, then white can, and I think white should! Then at least Nc3-a4-c5 is possible and there may be some annoying pressure on a6, although it shouldn't slow black down too much. 25.Kf2 Be6 (D) 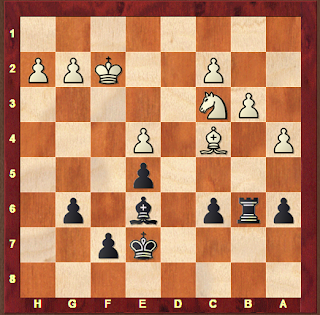 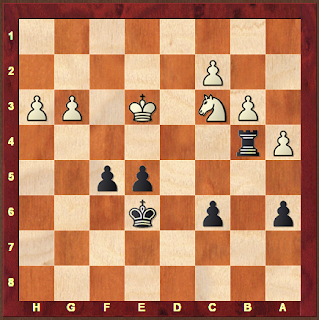 Exercise 2: Black has a winning endgame, but it still needs to be converted! See if you can play like I did and find the best plan to crack white's position. The answer will be posted at the end of the tournament. I went on to win this game - after a few more moves we reached the following position: 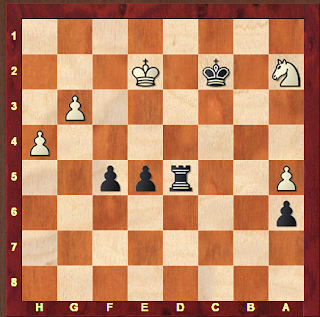 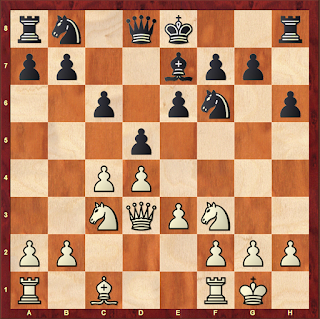 9.e4 A typical way for white to get some central space in this type of structure. 9. ... dxe4 It is almost always correct for black to capture, as otherwise e4-e5 allows white to gain some tangible advantage with his kingside space. 10.Nxe4 Nbd7 If I were black I would immediately exchange on e4 - black is slightly cramped and so should prefer piece exchanges. 11.Nc3 Since black didn't exchange last move, I don't allow him another opportunity to do so. 11. ... 0-0 12.Re1 Qc7 13.b3 Rad8 14.Qc2 Prophylaxis - I was not at all concerned about Nd7-c5 but e6-e5 was more worrisome. 14. ... Nb6 Not really a great square for the knight, but it controls the d5 square so after c6-c5 at least white cannot advance d4-d5. 15.Bb2 a6 (D) Covering b5 so that c6-c5 may be played without allowing Nc3-b5. 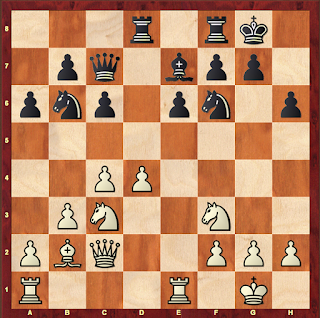 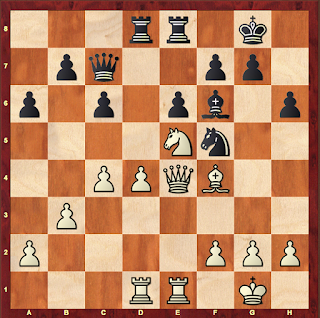 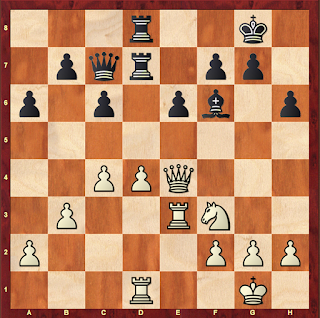 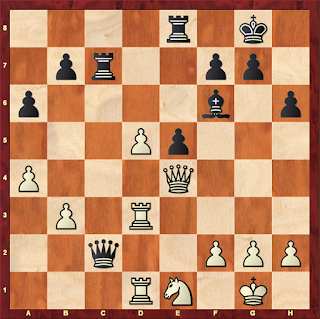 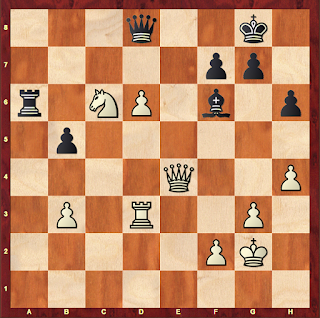 A very well played game by Don! He outplayed me through the first half of the middlegame but the critical moment was his decision to play 27. ... e5?! instead of the correct break 27. ... c5! Clif and Ken also both won their games, leaving the three of us in the lead with perfect scores. Next round I will have black against Clif.


In summary, Clif played strongly in the opening and middlegame to build an initiative, but was unable to ever land a decisive blow. In the endgame the critical blunder was 33.Kh2 simply hanging a pawn for no compensation. Ken won his game too, which means he will get to play me as black in the final round; we are the only two people with perfect 4/4 scores.

Round 5 - I play white vs. Ken McBride (2023)
In the final round me and Ken are the only people with 4/4. On board two Chris Brown (1928) played up against Clif Kharroubi. Other exciting match-ups within the 3/4 group were MacKenzie-Stubblebine and Phelps-Rizzo.

With that win I am the sole person with 5/5 and thus the 2018 CCCR Club Champion! Many thanks to Ron Lohrman, the tournament director and arbiter, as well as to Mike Lionti for organizing this event.

A notable upset from the last round was Toby Rizzo's (1853) win against David Phelps (2005) with black. Chris Brown blundered a piece early on against Kharroubi but nevertheless was able to thrash around quite a bit in the endgame before finally succumbing to a defeat. Finally, MacKenzie won on board three against Stubblebine, creating a four-way split at 4/5 for second place. After the smoke cleared, Ken McBride won 2nd place on tiebreaks and Clif Kharroubi took 3rd. All in all it was a great tournament and I look forward to doing another simul next summer!