We enter the final round of the Club Championship with a four-way tie:

The defending club champion, Lev Paciorkowski, is still in position to repeat.  However, there is also a chance that there might be co-champions this year!  The FINAL round will be next Wednesday night, Nov. 1st. 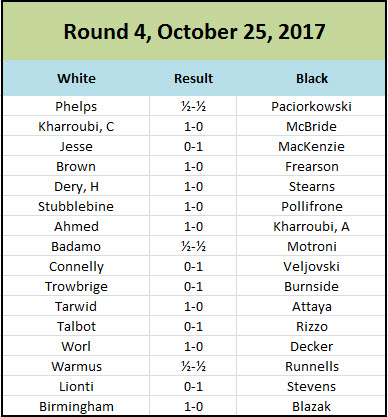 Tie-breaking in Swiss-System Tournaments:
As stated in the tournament announcement, there will be co-champions only for perfect scores. Since none of the participants have perfect scores, we may be using tie-breaks if there is no clear winner by points. 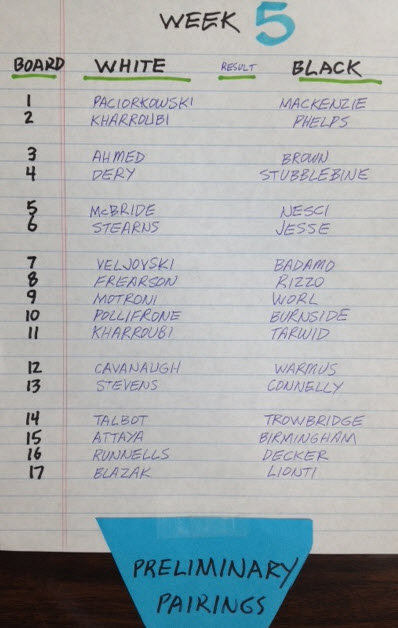 Before the start of every round, we have been giving out door prize drawings.  Every participant gets to choose one chess book from Doug Spencer's personal chess library and either a floppy score book or hardcover score book.  The chess library was donated to the chess club from Doug's brother David.  We are very thankful to David Spencer for the donation to our chess club.  The books remaining after the door prizes are all given out will be kept as prizes for future club events until all of the books in Doug's library have been distributed.

More Tournament News:
CONGRATULATIONS to Lev Paciorkowski who attained his highest USCF ratings so far (2398) with a tie for 1st place in the Centeral NY Open in Syracuse over this past weekend.  Blaze Veljovski also tied for first for a class prize.  Special mention also for Toby Rizzo who took 1st place in the Chess Center's Saturday Open tournament.  Toby's chess rating is now 1671.

Some photos from the Club Championship:

For the FINAL round on Nov. 1st, the chess club will be providing pizza.
The pizza, soft drinks & snacks will arrive at the Chess Center by 6:00pm. 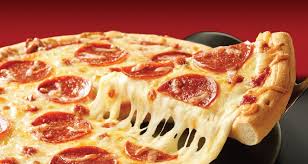 LINK TO CHESS GAMES !!!!!!!!!!
For a great selection of games from this year's club championship,
visit Jim Trowbridge's blog at "Smoke the Pawn" 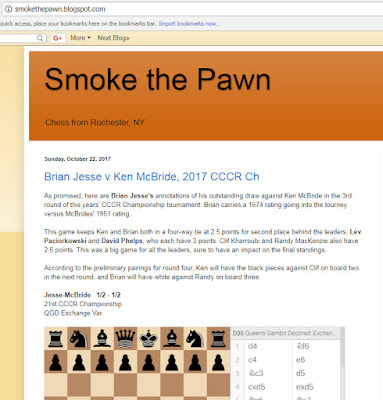 Here's another screen capture from Smoke the Pawn: 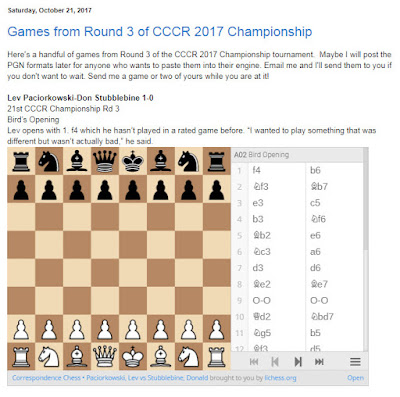 The Community Chess Club of Rochester (CCCR) would like to thank the following individuals for helping  to make this year's tournament a success. Preparing for a tournament starts months before the event, and runs well when there is a dedicated group of people offering their time and effort for planning and helping out wherever it's needed. 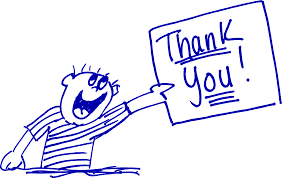 The participants - for helping to make this a great tournament!
Ron Lohrman - 21st year as this event's TD,  creating memorial note in Doug's books
David Spencer - donating chess books in memory of his brother Doug
David Phelps - setting up the display for Doug Spencer's book library
Jim Trowbridge - sharing blog with many tourney games and annotations
Mike Runnells - assistant TD and helping to organize the event, tracking ratings & membeships
Ken McBride - assistant TD and helping to organize the event, assisting with pairings
Mike Lionti - 21st year organizing this event, setting up snacks for every round, TD

Posted by Mike Lionti - Chess Blog Editor at 5:55 AM